A Light for Attracting Attention 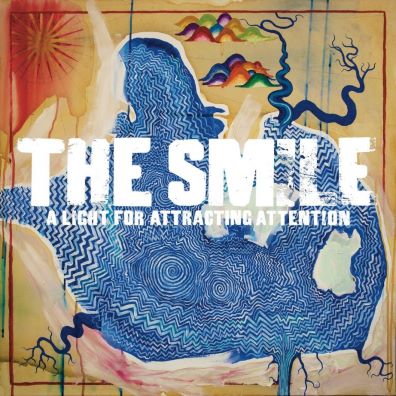 A Light for Attracting Attention

In the music world, a new Radiohead project feels like a seismic event, commanding the kind of attention that few other bands can. As one of the most universally beloved and remarkably consistent elder statesmen in what can loosely be defined as rock music, Radiohead albums each seem weighty and purposeful, the product of years of careful craftsmanship. At this point, the world hasn’t seen one of these events in six years, not since the band’s 2016 record, A Moon Shaped Pool.

In this setting, it’s been hard to place what exactly The Smile is. While the new band comes after a string of Radiohead side projectsーincluding Thom Yorke’s solo work and Jonny Greenwood’s film scoresーYorke and Greenwood’s new collaboration with Sons of Kemet drummer Tom Skinner has a distinctly familiar feel. More specifically, they sound like Radiohead, so much so that some are worrying that their debut record, A Light for Attracting Attention, may portend the band’s demise. However, while it is impossible to know when (or if) we are getting a new Radiohead record, The Smile do an admirable job of recreating that magic, crafting a record that often reaches towards the transcendence of Yorke and Greenwood’s best work.

Even without Ed O’Brien, Colin Greenwood, and Phil Selway in tow, A Light for Attracting Attention sports many of the same indelible fingerprints of a Radiohead project. The band’s gently layered sonics, emotive crescendos, spidery guitar work, and Yorke’s signature pristine falsetto all come intact, now burnished by smartly darting rhythms from Skinner. However, the record as a whole remains firmly rooted in the various styles Yorke and Greenwood have already explored at length on previous records.

Perhaps that familiarity explains the band’s unwillingness to label the album as a Radiohead record. After all, they have thus far remained committed to reinvention with each project. But though A Light for Attracting Attention does not aim for reinvention, it nonetheless crackles with a fresh kinetic pulse. In many ways, The Smile feels like Yorke and Greenwood letting their hair down and getting back to creating together without the massive expectations that accompany a Radiohead release.

That looser approach results in some of the most unexpectedly vital work that has come from either artist in years. The record’s first single, “You Will Never Work In Television Again,” even seemed to hint towards a return to Radiohead’s alt rock roots, with a snarling punk delivery and some the most propulsive guitars the band have conjured since their ‘90s era. Similarly, “Thin Thing” crackles with tense energy, contrasting the band’s spiked and wiry guitars with Skinner’s hyperactive syncopation and shimmering layered vocals from Yorke.

Along with “A Hairdryer,” these tracks are the closest Yorke and Greenwood have strayed towards rock music in over a decade, yet the full record quickly dispels any illusions of The Smile as only an exercise in nostalgia. The record opens with the thrumming synths and buzzing electronics of “The Same,” while later the band diverts into lush orchestrations and gorgeous symphonic swirls with “Pana-vision” and “Open the Floodgates.” Moments like these would not feel out of place on A Moon Shape Pool, but other tracks recall the glacial electronics of Kid A or the lush warmth of In Rainbows. The Smile approach the record with an alluring stylistic ease, incorporating Yorke’s fascination with electronics and stark piano compositions as well as Greenwood’s mesmerizing guitar work and classical orchestrations.

Where The Smile most sets themselves apart from Radiohead is with their newest addition, Skinner. Skinner’s presence behind the kit adds a special level of intricacy and lithe conjurations to the record, one that gives A Light for Attracting Attention its most distinct personality. Skinner comes from jazz rather than rock, adding a unique rhythmic touch to the record, especially with the skittering percussion of “Thin Thing” and “A Hairdryer” and the odd time signature of “Skrting on the Surface.” His smartly knotted rhythms prove to be equally as dexterous as Greenwood’s strings or Yorke’s falsetto. He manages to bring an anxious hyperactivity to the record’s more aggressive cuts, but he proves equally capable of settling into a sinuous groove as with “The Smoke,” or bolstering the hypnotic lull of “Speech Bubbles.”

However, if there is a certain ease to the band’s stylistic approach, their lyrics remain as uneasy and ruminative as ever. Often, The Smile traces abstract portraits of desperation and fear, pictures of anxious people under the looming threat of destruction. But Yorke is also biting and angry, more so than he has been in years. Radiohead have always offered their own cryptic commentary on modern life, and undoubtedly the pandemic era has given Yorke and Greenwood plenty of modern dystopias to call upon. Most notably, Yorke calls attention to the “evil eyes” and “piggy limbs” of abusive men on “You’ll Never Work In Television Again” and hints towards climate disaster with “The Smoke” (“And we set ourselves on fire/We set ourselves on fire”).

Though Yorke is once again preoccupied with cultural decay, climate change, and the growing specter of authoritarianism, the band’s outlook also reaches towards a rare and elusive serenity. The collective self-immolation in “The Smoke” can be read both as a cautionary tale for the price of ignoring disaster, or as an awakening and rebirth (“Wakes me from my sleep/Smoke wakes me from my sleep”). Despite the bleak imagery, Yorke constantly meditates on letting go and moving forward together. If Yorke sees a path through our modern dystopia, it seemingly is only through connection and collective action. He confesses on “Free in the Knowledge,” “I talk to the face in the mirror/But he can’t get through/Turns out we’re in this together/Both me and you.”

That quietly hopeful and surprisingly serene undercurrent makes for a record that is likely Yorke and Greenwood’s most welcoming yet. If you’ve been a fan of any era of their work, there is likely something for you on A Light for Attracting Attention. While the record feels thoroughly like a Radiohead album, that familiarity makes it a welcome salve without the usual pomp and weighty expectations of a massive release. The Smile’s looser creative approach offers a new light and welcoming side to Yorke and Greenwood, all while showcasing the enduring creative chemistry behind two of their generation’s most celebrated musicians. (www.thesmiletheband.com)