Why Artist Wendy Red Star Centered Indigenous People in Her... 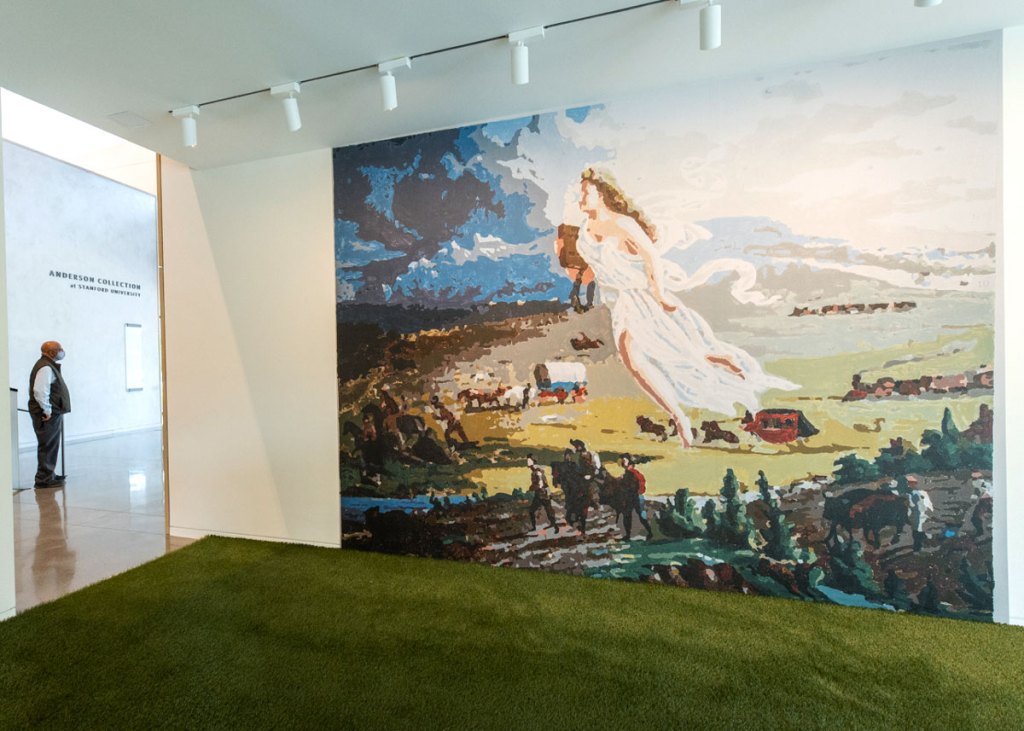 Artist Wendy Red Star was usually a sleepy freshman during her 9 a.m. intro to art history class at Montana State University during the early 2000s. But one morning, her professor projected a slide of John Gast’s American Progress (1872) onto the lecture hall’s massive screen. It jolted her awake. The iconic painting is meant to promote the idea of Manifest Destiny, centering on an oversized Lady Columbia who illuminates a path for white settlers to go West and develop supposedly untouched lands.

“The whole chasing the dark away, and all the people of color basically falling off the edge of the painting was shocking,” Red Star, who is of Apsáalooke (Crow) descent and uses historic materials to create multimedia works reasserting her tribe’s experience, described in a recent interview.

Her professor discussed American Progress in strictly formal terms, ignoring any conversation about how Manifest Destiny and colonization in general led to the displacement of numerous Indigenous peoples. That “didn’t match up with the heavy emotional feelings I was contending with,” Red Star said. “It really wasn’t highlighting the whole genocide or any of that. It was sort of normalized.”

Now, in a different academic setting, at Stanford University, Red Star has the opportunity to analyze the painting anew, by reimaging every part of it. The result is her solo exhibition at the school’s Anderson Collection, “Wendy Red Star: American Progress,” which includes several new, site-specific works, some of which were created together with students.

Red Star turned American Progress into a paint-by-number, then asked Stanford students to color it in. In the process, the Gast image transformed into a sort of map, albeit one where borderlines divide colors, not regions. In the student’s hands, the Gast painting became “blurred,” abstracted in many ways. The steam train in the right middleground becomes a chain of brown rectangles. Lady Columbia looks like she’s part of a celestial cloud formation.

“It simplified it in interesting ways,” Red Star said. “The [Gast] painting is so cut and clear, you see all the fine details, and then everything gets muddled and mushed together in this paint-by-number.” The end result was digitized and enlarged into a mural-sized print, now installed in a gallery coated with Red Star’s signature astroturf.

An important component to Red Star’s exhibition is how Stanford is a product of westward expansion, since its founder, Leland Stanford, made his fortune as president of the Central Pacific Railroad. Stanford’s railroad became “a vehicle to push Native Americans out of their land, and that’s very specific to this campus,” said Aimee Shapiro, the show’s curator.

Nowhere is that role more evident than in the ceremonial last spike that Stanford hammered upon the completion of the transcontinental railroad in 1869; that spike, which is inscribed with Stanford’s name among others, is now in the university’s Cantor Arts Center collection.

Red Star has recreated Stanford’s golden last spike as part of a carved foam sculpture where it pierces a buffalo skull. It is inscribed with the Crow insult “You are without relatives,” but more closely means that an individual is nothing without family or community, Red Star explained, adding “It’s the opposite of capitalism and what these [railroad] benefactors were trying to do.”

Railroad lines hold personal meaning for Red Star, who grew up on the Apsáalooke reservation in Montana. “On my reservation, throughout the history of my tribe, the railroad has really been a big threat,” she said. “Our [home’s] lane was an old railroad that blasted through a sacred site.”

Another new sculpture is a 10-foot inflatable Lady Columbia, which greets visitors in the gallery’s lobby. Red Star has refashioned Gast’s Lady Columbia into the type of implausible superhero would be at home as part of the Macy’s Thanksgiving Day Parade. “She’s so captivating and serene and floating, while basically she’s this death monster,” Red Star said, noting that Lady Columbia brings with her telegraph lines as she approaches the West Coast.

The expanse of Lady Columbia’s dominion is laid out in a U.S. map printed on black vinyl, with implanted white flags representing hundreds of tribal lands. Called Their Land (2022), the map emphasizes the presence of Native tribes today, countering the misconception that Indigenous people are all but extinct. Nearby, a digital projection shows a collection of tribal seals found and researched by Stanford students. There is no consolidated repository or database for these seals of America’s over 500 Indigenous tribes (and closer to 800, if accounting for those that are not federally recognized). “Being able to show those seals and those flags, in connection with the map, is really powerful and says: ‘Hey, we’re here,’” Shapiro said. “And everything you’ve been told is not everything.”

In a hallway that connects the galleries where Red Star’s American Progress and Their Land are on display are 16 paintings on paper of buffaloes being hunted, a nod to the buffalo herd being chased in Gast’s American Progress as well as the fact that the U.S. government slaughtered tens of millions of buffalo during construction of the transcontinental railroad to purposefully starve Indigenous people. Red Star copied depictions of dying buffalo by both Indigenous artists and 19th-century painter George Catlin, turning each into a close-up portrait of a bloodied animal against a flat white background.

With the exhibition, Red Star hopes to challenge the notion of what exactly constitutes American progress. “When you say progress it’s positive, right? We’re making progress. For me, progress in this context is complicated.”

She continued, “It’s contending with more narratives, and it’s pulling out those narratives that are literally being chased off the canvas and analyzing that. It’s not answering any questions, it’s actually probing questions. For me, it’s about complexity. That’s what this whole show is about.”