Good to see and hear a full-scale choral work like... 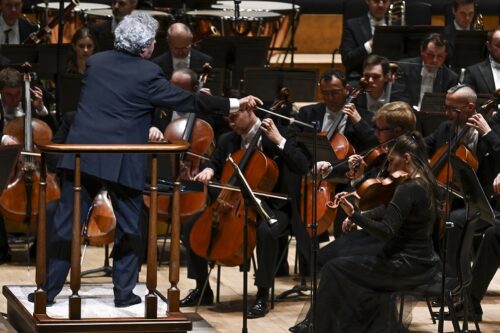 It is good to see visiting orchestras returning to perform in the capital after what feels like an interminable hiatus due to Covid restrictions. Last week the Czech Philharmonic were in town to perform two concerts on consecutive evenings – the second of which was devoted to two of its country’s most well-known musical sons: Dvořák and Janáček.

Dvořák’s Eighth Symphony is one of his most joyous, infused with Bohemian melodies throughout, and designed to lift the spirits. And as conductor Semyon Bychkov reminded us before a note had been played, we are living in dark times and need the healing power of music more than ever before. After a rousing and heartfelt performance of the Ukrainian national anthem, the cellos launched the symphony in a suitably eloquent manner, where it became immediately apparent that here was an orchestra at the top of its game. The Bohemian composer’s music is its lifeblood, yet there was no sense of routine in the playing whatsoever.

Under Bychkov’s inspired direction every note and phrase came across freshly minted, and he wasn’t afraid to risks with tempi either. The first movement had colossal guts and drive, which in lesser hands might have caused orchestral textures to blur, yet here every line was crystal clear. He was rewarded with dextrous playing from all sections, especially the strings, whose passagework was exemplary and they played with a glorious sheen from the offset.

The Adagio was suffused with warmth, while in the Allegretto grazioso the lilting, waltz-like themes swirled through the orchestra with a lightness of touch, transporting us to a nineteenth-century ballroom. With delicate touches from the woodwinds, Bychkov captured the capricious nature of this movement to perfection.

The trumpet reveille which heralds the fourth movement was thrillingly played by Stanislav Masaryk – the strings responding with warmth and a fullness of tone, where Dvořák introduces the main theme of the Allegro. With braying horns and fluttering woodwinds, this final movement was bracing and exhilarating in equal measure. A glorious performance. 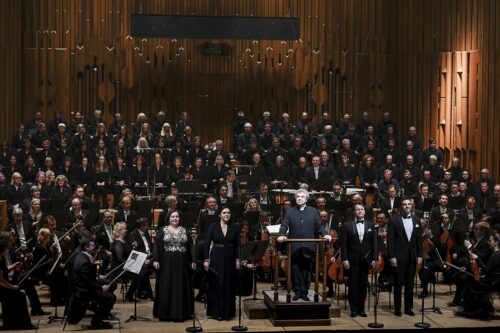 Any performance of Janáček’s Glagolitic Mass should be life-enhancing. There is nothing quite like it in the choral repertoire as it defies all the norms of what one usually expects from a mass. Written in 1926, when the Czech composer was 72 and enjoying a burst of musical creativity during the glorious Indian summer of his career, it makes huge demands of any orchestra, choir and soloists who choose to tackle it. One could not help but feel that the most difficult hurdle the performers had to overcome was the Barbican Hall itself. Its dry acoustic did not allow the work to blossom in the way it should, and given the prominence Janáček affords the organ, the electronic one used here, which was amplified throughout the hall, simply was not up to scratch, despite Daniela Valtová Kosinová’s flawless playing. It just didn’t sound right.

Several performing editions of the Glagolitic Mass exist, with Bychkov leading a big-boned performance of the so-called ‘letze Hand’ (left hand) version from 1928. The playing of the Czech Philharmonic was beyond reproach as it tackled Janáček’s idiosyncratic orchestration and unique orchestral palette head on. The City of Birmingham Symphony Chorus joined them and given it has been over two years since I have attended a choral work of this magnitude, hearing such homogenous and thrilling singing was viscerally exciting. Well drilled by chorus master Simon Halsley, they never put a foot wrong. Whether intoning the opening Gospodi pomiluj (Kyrie eleison) with a hushed intensity or singing at full pelt in the declamatory sections of the Věruju (Credo) and the Svet (Sanctus), they rose to the challenge magnificently.

Having four native Czech-speaking soloists resulted in the ancient Czech text coming across with unusual immediacy. Soprano Evelina Dobračeva’s tone tended to spread under pressure, but her voice has a nice Slavic bite which allowed her to cut through the often-dense orchestral textures, especially in the Slava (Gloria). Tenor Aleš Briscein’s stentorian tones certainly made an impression in the Amin (Amen) section of the Slava, but more light and shade would have benefitted his singing throughout – though it is only fair to say that Janáček doesn’t make it easy for the tenor.

Bass Boris Prýgl displayed a warm, well-schooled voice, even it was a shade on the light side for the hall, and mezzo Lucie Hilscherová made her mark despite having very little to sing. Despite a few reservations, mostly to do with the venue, this was still an admirable and moving account of this strange, enigmatic work – and it was good to see a full-scale choral work again after such a long time.