LAST CALL AT THE HOTEL IMPERIAL 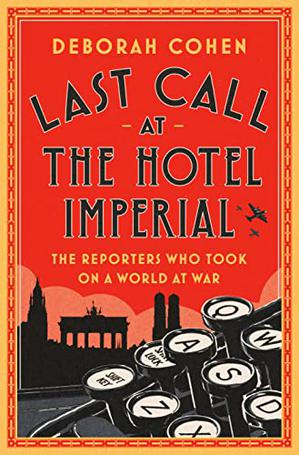 A scintillating group biography of once-famed journalists who were alternately friends, allies, lovers, and rivals.

Of the central ring of reporters Cohen profiles in this excellent ensemble study, only John Gunther is well remembered, mostly for his bestselling 1949 book, Death Be Not Proud. Some second-tier members are better known: William Shirer, author of The Rise and Fall of the Third Reich (1960), and Rebecca West, author of Black Lamb and Grey Falcon (1941). Yet everyone who passes under Cohen’s gaze is fascinating: H.R. Knickerbocker, known as Knick, winner of the Pulitzer Prize for his reporting on Stalin’s Russia; Jimmy Sheean, who won the first National Book Award for biography, in 1935; Dorothy Thompson, the first woman to head a foreign news bureau, in Berlin; and Gunther’s wife, Frances, an intimate of Jawaharlal Nehru’s with a lively command of both the English language and world politics. All produced extraordinary reportage that helped American readers understand the forces leading up to World War II, undertaking considerable risks. As Sheean wrote of Thompson, she excelled because “she could always step over the corpses and go on, steadily, resolutely, right to the end, with her head held very high indeed,” while Knick spent a terrifying couple of days sure that he would be executed by “Franco’s goons.” Cohen’s narrative reads like an Alan Furst novel, full of close calls and intrigue—e.g., Gunther had an affair with a Danish journalist who was a guest of Hitler’s at the 1936 Olympics, slept with John F. Kennedy, and was suspected of being a spy but really was just “an equal opportunity enchantress.” The reporters’ prescience was extraordinary, as when Sheean predicted that Gandhi would be killed by another Hindu. Cohen, a professor of humanities at Northwestern, convincingly argues, too, that journalism was the true literature of the interwar period, shaped by outsiders from small towns who wanted to better understand the world.

An exceptional book of cultural history that makes one long for the days of teletype, booze, spies, and scoops.