REVIEW: Tell Me Straight at The Chiswick Playhouse

The social issues of the present have got human beings questioning their own identities more than ever; sexuality, mental health and internalised prejudice being a very small portion of these topics.

‘Tell me straight’ is a powerful piece of new writing by Paul Bradshaw, which dynamically explores these ideas, and that prejudice and homophobia are inheritably internalised within us all. After being performed in various small theatres around London, director Imogen Francis has brought this coming of age piece back on its feet in an immersive yet uncomplicated way.

The writer, Paul Bradshaw, also plays the central character of the play, known as ‘he’ (as we never find out his real name). This character embodies a millennial gay man who is trying to break his self-destructive cycle by adopting a 30-day detox from sex, fast food and alcohol to gain a new and healthier perspective of life. His newly found sobriety forces him to become more self-aware and examine his relationships with dating, sex, his friends, and his own self-respect. As an audience, we quickly become aware that this character has a certain soft spot for men who identify as straight; the ‘forbidden fruit. These male characters are multi-roled by actor George Greenland. It becomes apparent that these men are struggling with their identities; using him as a scapegoat to figure out their own sexuality Throughout the piece, we meet men who constantly disappoint the central character, leaving him to question his own identity, strengths, and why these other men are not ready to commit and confront their sexualities. 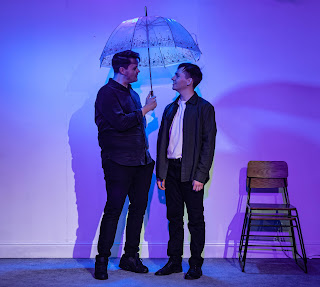 There is very little to critique in this production. The writing and direction are quick, clever and honest. Both actors play their roles with class, sensitivity, humour and intellect. The black box staging at the Chiswick playhouse really lends itself to this intense and immersive style of work. The moments when Bradshaw broke the fourth wall and spoke directly to the audience were my personal highlight; it felt very inclusive, personal and not at all out of place. It is a very stripped back production; no use of set and minimal props. The lighting by Chloe Stally Gibson is very naturalistic, suitable and not at all excessive or distracting. The use of stagecraft is excellent; Bradshaw remains on stage for the entirety of the one-act play and Greenland barely leaves. I liked this touch from Bradshaw and Francis, as it heightened the idea of the central character exposing himself and his emotions for love and validation at all times; in this case, it was to the audience. Greenland’s versatility in this production is sensational; he plays a vast array of men and each character is so different that it’s hard to believe they are all played by the same actor.

For any theatre-goer who is looking to be mentally challenged about the ongoing questions we ask ourselves mixed with a good belly laugh, then this is the type of honest and stripped back theatre you should be watching. Every moment is engaging and as an audience member, you experience an array of emotions within the 75 minutes of action. ‘Tell me Straight’ is running until the 26th of February at the Chiswick Playhouse.