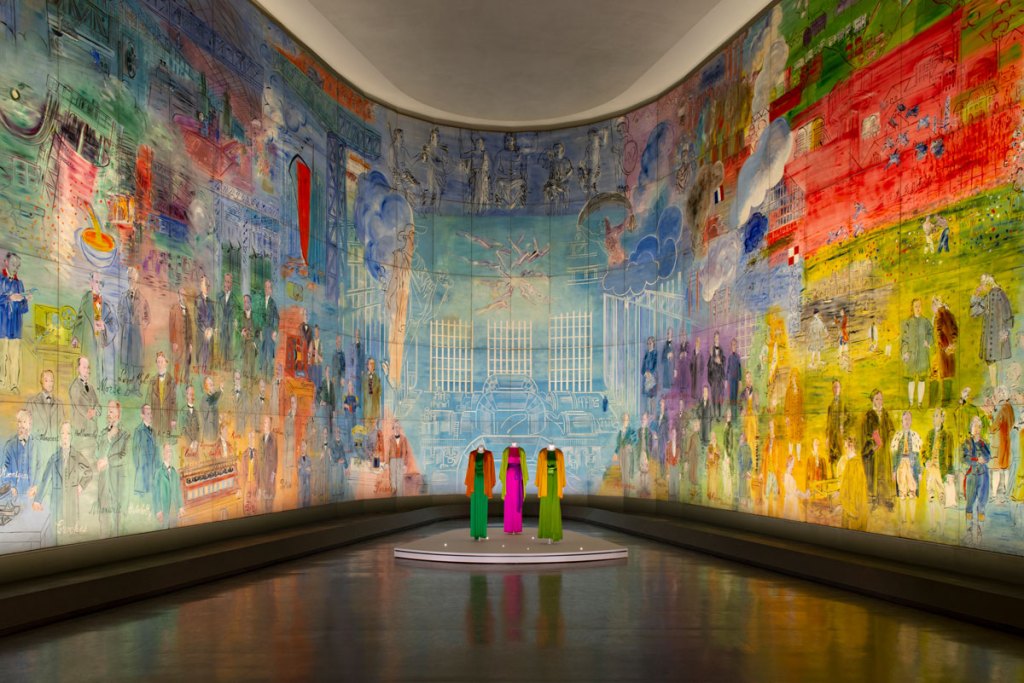 From Picasso and Matisse to Lichtenstein and Warhol, Yves Saint Laurent drew inspiration from a great deal of artists from throughout art history, and the art world has always loved him for that. The fashion designer’s 1983 retrospective at the Costume Institute of the Metropolitan Museum of Art, the first devoted to a living haute couture designer, paved the way for countless other fashion-related exhibitions at art museums that have exploded around the world in the decades since.

And now, Saint Laurent is the subject of what is likely the largest survey of any fashion designer, with his genius taking center stage at no fewer than six Parisian museums. On view until May, the exhibitions all officially opened on January 29, the exact day, 60 years ago, when the then 26-year-old Saint Laurent launched the debut collection of his eponymous label with a presentation at its first house, the former studio of French Impressionist Jean-Louis Forain. Six institutions have joined forces to celebrate this momentous anniversary: the Centre Pompidou, the Musée d’Art Moderne de Paris, the Musée du Louvre, the Musée d’Orsay, the Musée National Picasso–Paris, and, of course, the Musée Yves Saint Laurent Paris, all focusing on different themes, from color to literature to French craftsmanship.

“All six museums were, to our great surprise, unanimously welcoming,” said exhibition co-curator Mouna Mekouar, who had pitched the idea of a six-venue exhibition to the Pierre Bergé – Yves Saint Laurent Foundation. “The real challenge was to stand out, while still blending into the permanent collections; we did not want to violate the identity of our hosts.”

Mekouar and her co-curator Stephan Janson made sure to work closely with each institution’s curatorial and conservation teams in building the exhibition. At the Centre Pompidou, where the exhibition spans the fifth and sixth floors, Saint Laurent’s designs are displayed as works of art by history’s greatest artists, hanging on walls like canvases or standing as tall as sculptures. “This effect is accentuated by the absence of accessories—no shoes, no hat, no cape. The piece of clothing alone, just for what it is,” Mekouar said.

Some confrontations are more direct than others. There are obvious ones like when a design directly riffs on a painting, like a 1965 wool jersey cocktail dress that incorporates Piet Mondrian’s signature grid-like abstractions. In the exhibition, the garment is paired with the Dutch painter’s 1937 Composition en rouge bleu et blanc II. But this connection has even broader significance in that the collection immediately raised the public profile of Mondrian.

“Only art historians knew Mondrian when Saint Laurent decided to dedicate his 1965 fall-winter line to him,” Mekouar said. “YSL was instrumental in introducing him to a wider audience.” The Centre Pompidou mounted Mondrian’s first retrospective in 1969 and then the artist’s work entered its permanent collection in 1975.

The museum team wanted to portray Saint Laurent as much a man influenced by artists from the past—Velasquez, Goya, Botticelli, to name a few—as well as a man of his time, looking at the work of contemporary artists for inspiration as well. His 1981 evening dress “Homage to Fernand Léger” was made in the same tones as the Cubist artist’s 1952 Polychrome Flower, exhibited next to it. Martial Raysse’s Made in Japan – La Grand Odalisque (1964) was brought together with a fox fur coat (1971): the two share the same vibrant emerald green. Later in the exhibition is a table covered with over 500 Polaroids spanning various collections made between 1979 to 2002 that can be read as the story board of YSL’s extraordinary and prolific career.

The Musée d’art moderne de Paris, on the other hand, concentrates on color, which Saint Laurent aspired to “put into motion.” To accommodate the light sensitivity of many of the textiles on views, the museum—the galleries of which are often bathed in natural light—had to partly reshuffle its permanent collection to welcome YSL designs. The Bonnard room is a case in point: The Garden (ca. 1937) and The Lunch (ca. 1932) were moved into a dimmer room to be exhibited alongside two organza outfits explicitly inspired by the Nabi painter. Elsewhere, Saint Laurent’s designs are paired with neon works by Lucio Fontana; both artists dreamt of sculpting light and had the same impulse to include neon in their practices. But the three bright jewel-toned dresses with contrasting overcoats perfectly matching Raoul Dufy’s room-sized mural Fairy Electricity (1937) may be the most impressive installation of the entire show for the drama this juxtaposition inspires.

At the Louvre, “we had many options,” Mekouar said. “We could have opted for a dialogue with Spanish painters, Goya and Velázquez, or with Renaissance masters, but we chose to settle in the Galerie d’Apollon, which conveysSaint Laurent’s fascination for lavish environments.” The gallery has been home to the French Crown Jewels since 1887, and YSL was known for turning some of his designs into pieces of jewelry. The “Hommage à ma Maison” jacket (Spring Summer 1990) was made as a thank you for the people who worked with him, and fabricated in crystal rock. It echoes a nearby display of vases in the same material, which belonged to Louis XIV. On view is also the heart-shaped jewel the couturier had Maison Scemama design in 1962, and would give his favorite model before she hit the runway. This ritual carried on until the designer’s last show.

Saint Laurent was a great admirer of Marcel Proust, having read the 20th-century French author’s masterpiece In Search of Lost Time from a young age. Proust is believed to be one of the inspirations for Le Smoking, one of YSL’s most iconic and groundbreaking designs—a tuxedo suit for women. This passion for Proust is at the center of the Musée d’Orsay portion, which takes us back to the Baron de Rothschild’s 1971 Proust Ball at the Château de Ferrières, which gathers together a selection of preparatory sketches by Saint Laurent for attendees. Some of the corresponding designs, including for the Baroness’s and Jane Birkin’s Belle Epoque dresses, are presented further away, by the top-floor bookstore.

For the Musée Picasso there was only one way to go. Saint Laurent paid various tributes to the Spanish master throughout his career, often quoting from paintings made throughout his career as well as Picasso’s designs for the Ballets Russes. The navy-blue jacket on view here seems to be the exact copy of the one in Portrait of Nusch Eluard (1937). And the pattern in the center of a neighboring black dress resembles Buste de femme au Chapeau Rayé (1939). Both designs stem from the “Homage to Picasso and Diaghilev” collection, presented in 1979, exactly three months before the finalization of the Pablo Picasso dation, in which his heirs donated works to the French state as a form of inheritance tax and which led to the creation of the Musée Picasso.

As for the Musée Yves Saint Laurent, the mother house, the epicenter for the whole project titled “Yves Saint aux Musées,” the showing here retraces the designer’s process of making clothes, from selecting buttons and prints to shaping shoes and hats. The only actual design on display is “Homage to Vincent Van Gogh” (Spring Summer 1988) featuring a glittery version of the painter’s famed “Sunflowers” series. In the former atelier are linen prototypes including one with a Braque-looking pattern on it. This is where seamstresses would wait for Saint Laurent to take a look at their work.

The first room at the museum recreates the last YSL show, in 2002, through a selection of sketches. Many of the corresponding designs are on view in the other five museums. Though all six exhibitions can be visited in any order, the presentation at the Musée Yves Saint Laurent serves as both a beginning or an ending of this sprawling, monographic six-stop journey. Comparing the event to various islands on an archipelago, Mekouar said, “This is a treasure hunt for those who enjoy following hints and clues.”