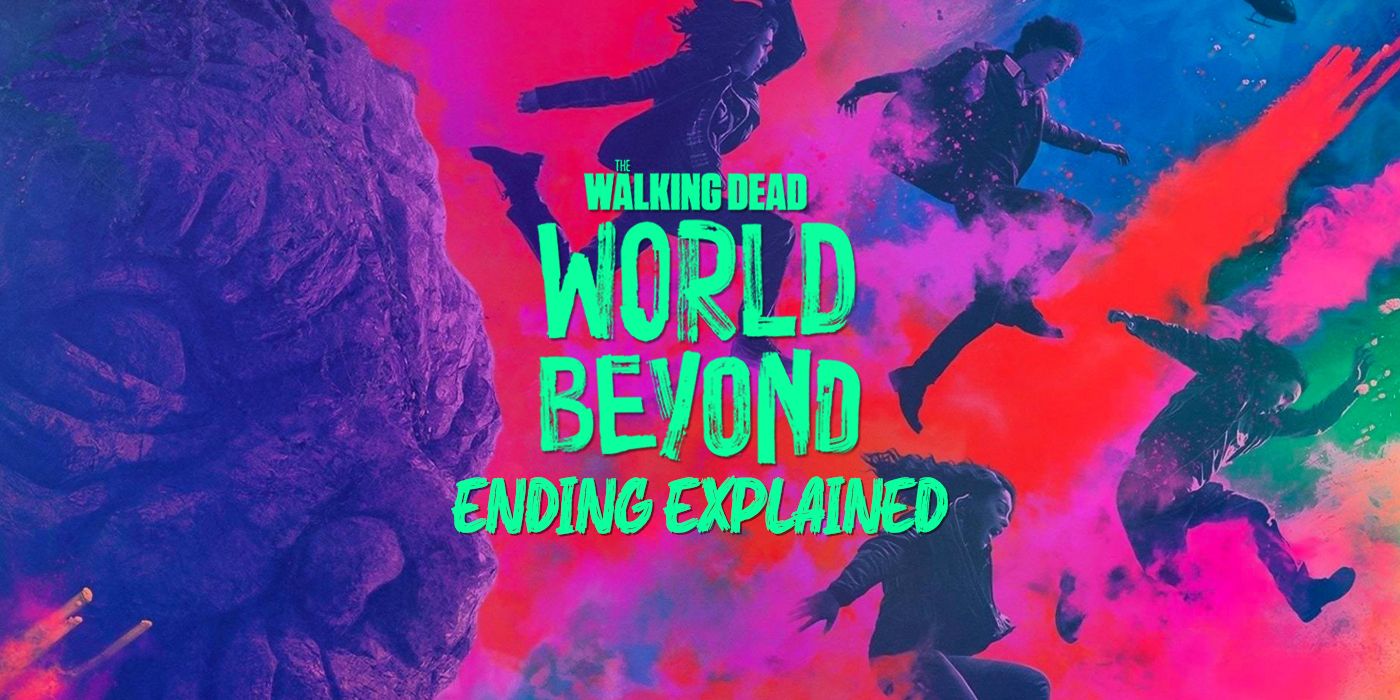 The third series in The Walking Dead franchise, The Walking Dead: World Beyond is set ten years after the original apocalypse and focuses on the last generation of kids who remember the world before. Now, as teenagers, they have to figure out who they are without the safe harbor of Omaha, Nebraska they have grown up with as they go out on their own into the new world for the first time.

In Season 1, four teens affectionately referred to as “The Endlings” – Hope Bennett (Alexa Mansour), her sister Iris (Aliyah Royale), Elton, (Nicholas Cantu), and Silas (Hal Cumpston) – leave their safe haven in Omaha to cross the country on foot to find their father, Leo (Joe Holt), who is working at the Civic Republic Military research facility in New York. They are accompanied by Felix (Nico Tortorella), whom Leo has entrusted to watch his daughters; Huck (Annet Mahendru), who turns out to be a double agent for the CRM and whose real name is Jennifer; and Elizabeth (Julia Ormond), the daughter of the CRM’s leader.

Season 2 begins with Hope being taken by the CRM, leaving Iris behind with Felix to fend for themselves in the wilderness. Felix is overjoyed to be reunited with his boyfriend Will (Jelani Alladin), who reveals to them that the CRM killed everyone in Omaha shortly after their departure. Silas surrenders to the CRM to let Elton and their new friend Percy (Ted Sutherland) escape.

Here is a quick recap of the season before we get to how it all ended.

RELATED: ‘The Walking Dead’: The 9 Most Controversial Decisions Made By Rick Grimes

Silas is assigned to a work camp run by Dennis (Maximilian Osinski). Skeptical of each other at first, Dennis and Silas become allies and wind up working together on the escape plan run by Silas’ friends and Dennis’ wife, who turns out to be Jennifer/Huck.

Upon her return, Jennifer/Huck is reunited with her mother after her successful mission in retrieving Hope from Omaha. Elizabeth brings on Jadis (Pollyanna McIntosh), a familiar face to Walking Dead fans, for a security review of the facility. Jadis has gone full CRM soldier and is suspicious of everyone, but primarily distrusts the Bennett family. Jennifer/Huck slowly realizes the Bennetts were right about the CRM and starts working with them to bring down the CRM from the inside.

Leo is ecstatic when Hope finally arrives, soon followed by Iris, Felix, and Percy. They immediately share their suspicion of the less than ideal motives of the CRM. When Leo’s girlfriend and fellow scientist, Lyla (Natalie Gold), is executed by Jadis after not being able to prove that her research is working, the Bennetts come up with an elaborate escape plan. The Bennetts, along with Felix and Percy, discover the chlorine gas they used to exterminate Omaha and realize the CRM plans to do the same to Portland, another thriving settlement.

Iris and Felix take refuge at the Perimeter settlement with Will where they are introduced to Indira (Anna Khaja), who agrees to hide them. Indira has a secret agreement with Elizabeth allowing them to live independently of the CRM: Elizabeth will supply her with medicine as long as Indira does not harbor refugees. Elton and Percy arrive and reunite with Iris and Felix. As they all discover the CRM’s motives, Felix and Iris decide to surrender to the CRM and work with Leo and Hope from the inside. Percy poses as Elton to go with Felix and Iris, while Elton stays behind with Will in Perimeter to handle communications from there.

How did it end?

The grand plan is for the Bennetts, Felix, Percy, and the scientists to exit through tunnels underneath the CRM and take General Beale’s son, Mason (Will Meyers) hostage for bargaining. Jadis’ soldiers first head to Perimeter, but Will ends up thwarting the attack thanks to surprise assistence from Dennis and Silas. However, Dennis is wounded with by a gunshot to the stomach. Jadis catches up to Leo, Felix, Iris, Percy, and Mason, and Jennifer/Huck has to blow her cover to help the escapees. Mason tries to escape during the gunfire, and Percy chases after him and is fatally shot in the head. Jennifer/Huck takes refuge at the culling station and is able to help nurse Dennis’ wound when they return. She also manages to locate the chlorine gas the CRM was hiding at the culling station. She sends Dennis and Silas off to find a way to detonate the gas. Jadis arrives and they fight until Jadis fatally stabs Jennifer/Huck. However, before she dies she is able to detonate the gas supply and destroy the CRM’s plans for their destruction of Portland. Seeing the explosion, Dennis knows his wife is gone and asks Silas to kill him as he knows his wound is fatal. He also knows this is the only way Silas will be taken alive if they think he was an unwilling participant in the escape. Silas kills Dennis and is taken into CRM custody. Jadis doesn’t altogether believe his story but makes him a soldier anyway. Also, was that Philadelphia in the background when Jadis was chatting with Silas? Is that the hidden location of the Civic Republic?

After Felix brutally kills his nemesis in the CRM army, the rest of the group is able to meet up at the rendezvous point. Elton gets bit while saving Hope, but they are able to amputate his arm in time. At this point, they all decide on their future. Will and Felix agree to stay behind with Indira, Leo, Hope, and the scientists to set up a research lab at the nearby Cornell. Iris takes a newly healed Elton and the Perimeter group on a mission to Portland to warn them that they are now on the CRM’s radar. Silas joins the CRM, and Jadis imprisons Elizabeth and declares herself the new leader of the CRM.

Where do we go from here?

Despite the fact that the series has ended, none of the storylines really came to a conclusion. Silas seems to be sliding into the Eugene role as a CRM soldier whose agenda we will not know until the moment of the truth, the research lab seems to be thriving (while remaining inexplicably undetected by the CRM), and Iris and Elton seem to have reached Portland. So, was the finale meant to be open-ended, suggesting that these characters are more or less doomed to continue fighting on and on? Or are these stories being left open for possible future appearances in other shows in the Walking Dead universe? That last bit of speculation got a little bit of fuel in the form of a curious mid-credits sequence that potentially turns the whole Walking Dead universe on its head.

Remember Dr. Edwin Jenner (Noah Emmerich), the CDC scientist from way back in Season 1 of The Walking Dead? In the post-credits scene, we see a mysterious woman in a lab watching tapes of Dr. Jenner talking about scientific research on the stages of reanimation being conducted in the very same lab. He mentions the lab conducting experiemnts on jump-starting the circulatory system, which inadvertantly created variants of the zombie virus. Dr. Jenner mentions wanting to learn more about the lab’s methodology, and the mysterious woman is revealed to have been one of the scientists who worked at the lab. Suddenly, a gunman confronts her and accuses her of “starting this whole thing and making it worse” before shooting her dead. Once she is killed, she reanimates much faster than we’re used to. Also, she’s not slow and shambling like the walkers we’ve grown accustomed to seeing, but is moving at a normal human pace as she begins to attack the door rather aggressively.

Is this the variant Dr. Jenner was speaking of? Are the reanimates going to become faster and more frightening? Will these walker variants end up in the other two series’? And most importantly, was the reanimation virus created in a lab?

Given that World Beyond took place a little ahead of The Walking Dead in the canonical timeline, it’s unclear how this new information will fit into the grand scheme of things, but there is a chance we will see some of these characters again. After all, Jadis and the CRM have already been established on the other shows, so we can only hope this isn’t the end of the Endlings’ story.

Blood and guts and walkers, oh my!

Jennifer McHugh has been obsessed with television and movies since growing up in the Poconos in Pennsylvania. Even though she lives in Los Angeles, she is a Broadway fanatic and will discuss musicals with anyone even if they don’t ask. She is also a long-suffering NY Mets fan. Favorite hobbies include watching TV with her cat, Herbie, YouTube cooking videos, and listening to True Crime podcasts. She understands this is quite unoriginal.