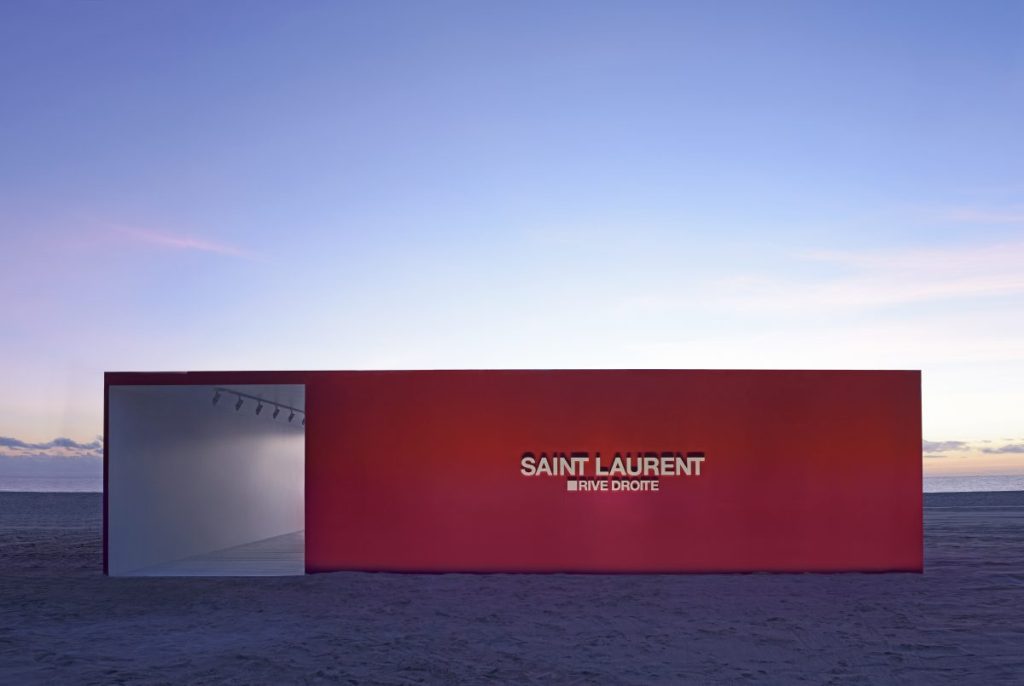 For Miami Art Week, the fashion brand Saint Laurent tapped designer and artist Sho Shibuya for an exhibition mounted on the sands near 17th street. The French luxury label’s creative director, Anthony Vaccarello, commissioned Shibuya to show a series of painted newspapers made as part of his series “Sunrise from a Small Window.”

Shibuya, the New York-based founder of the creative studio Placeholder, started the series last year in response to the pandemic. In April 2020, he began painting over the front pages of the newspaper as reports related to crisis and social unrest began to worsen in tone. Painting the sunrise over dark reports of the day served as what a Saint Laurent press release describes as a “mediation on the contrast between the stable morning sky and the increasingly chaotic news.”

One of the works in the series features calm shades of blue painted in a solid block beneath a headline that reads, “U.S. Deaths Near 100,000, An Incalculable Loss.” “This was the day the severity of the pandemic set in,” Shibuya told the the Times in an interview shortly after. “I painted the whole cover instead as my homage to the people who suffered.” Other editions containing reports of rioting at the U.S. Capitol and news of vaccinations are painted over in red and flesh tones.

For the exhibition in Miami related to Saint Laurent’s Rive Droite concept—which embraces contemporary art and design that follows in the legacy of the brand’s limited-edition wares made with artists in ways that merge luxury and street style—Shibuya incorporated elements of the environment with a large-scale minimal structure that sits on the shorefront housing the paintings on its walls. With the temporary space, Shibuya and Vaccarello aimed to capture the transitions of light around the horizon line at dusk and dawn. The paintings are displayed in order of chronology, to emphasize Shibuya’s meticulous recording of each day through his tonal gradients.

Shibuya joins a long lineage of artists preceding him who have used the New York Times as a medium to respond to current events, ranging from Ellsworth Kelly (see his 2003 collage Ground Zero) and Lorraine O’Grady (her 1977 work Cutting Out the New York Times) to Fred Tomaselli and Rirkrit Tiravanija.

For Vaccarello, curating a show around images produced in the last two years—many of which have captivated public attention—marks a move to stay in tune with the pandemic zeitgiest. And it is not the first time that he, as Saint Laurent’s creative director, has looked to artist collaborations to elevate the label’s output. He recently curated a showcase of photographs by Jeanloup Sieff for the Paris Photo fair and commissioned Doug Aitken to create an installation in Venice that served as a runway stage in July.