Which Eternals will fans ship the most? 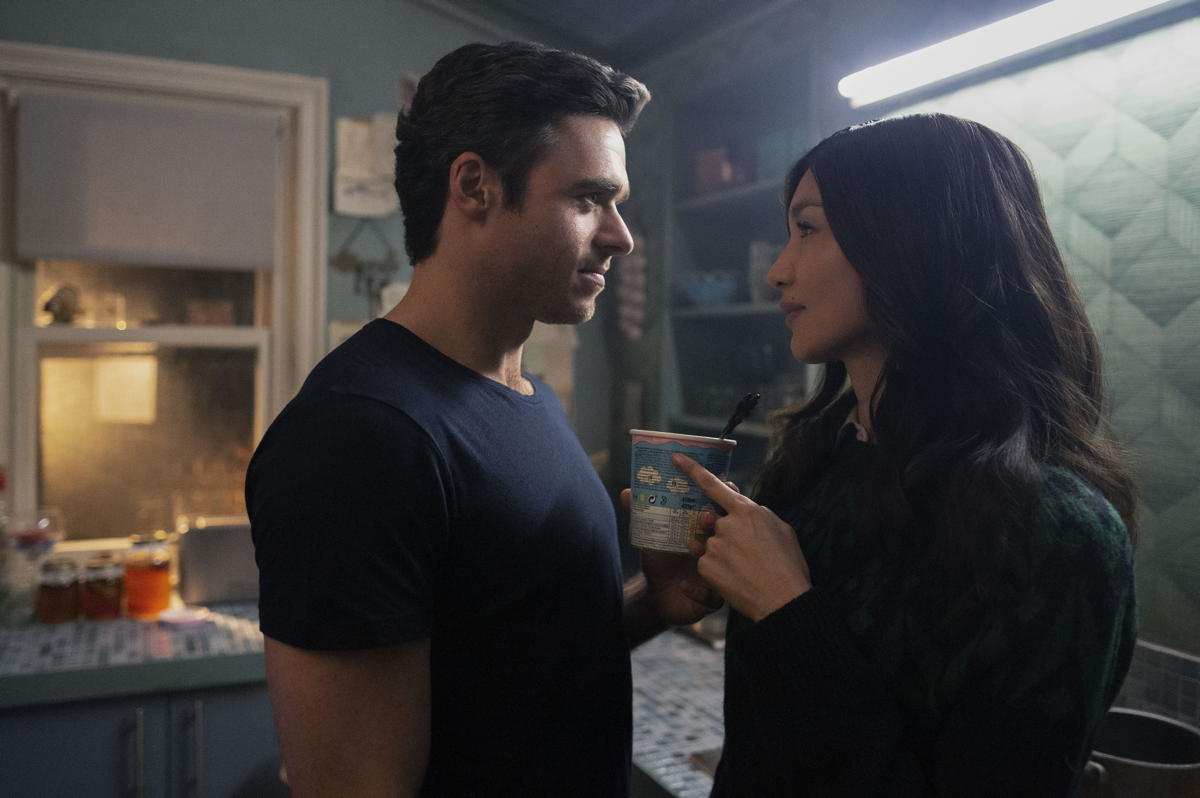 [MILD SPOILERS FOR ETERNALS BELOW]

Eternals is set to be the most divisive movie yet in the MCU. Critics yawned, entire countries have banned, and fans are just beginning to weigh in. Will they like what they see? Having seen Eternals already, I think there’s a lot more to love for fans here than you may have heard. And here’s a guide to the most likely candidates for Eternals fanfic – with some supporting evidence from the cat and crew themselves.

In a way, the Eternals are essentially vampires without the icky parts – nearly immortal, beautiful, attached to mortals, but drifting in and out of their lives. It’s a theme often spoken of in the myths of many lands – myths that Eternals’ multi-cultural cast intentionally echoes.

But will fans get caught up in the storyline and want to ship these often-stand-offish beings? Dune, based on a venerable SF classic, has definitely caught on with the AO3 crowd. Will the tasteful, distant, naturally lit Eternals?

One thing in the film’s favor: there is actual on screen sex and romance, something long missing from the MCU. (By my count the last time there was an MCU sex scene was the Edward Norton Hulk and Liv Tyler, which went horribly wrong. No wonder they haven’t tried since.) Although in MCU films cameras lovingly linger on some of the world’s most swoon worthy stars, all the actual sparks have been left to Tumblr and AO3.

But in Eternals, affairs of the heart are front and center. The love triangle between Sersi (Gemma Chan), Ikaris (Richard Madden) and human (or is he?) Dane Whitman (Kit Harrington) forms the emotional core of the film. Attachments – sometimes spoken, but more often unspoken – propel most of the characters. Phastos (Brian Tyree Henry) is the MCU’s first openly gay character, and devoted to his human husband, Ben (Haaz Sleiman) and their son. Another character’s unspoken love of Ikaris drives some of the plots most shocking twists. And just what is going on between Druig (Barry Keoghan) and Maccari (Lauren Ridloff)?

A lot of this has to do with MCU head Kevin Feige’s desire to chart a new course for Phase Four of the MCU.  Like a chef experimenting with some new flavors in the kitchen, Feige and producer Nate Moore (who is credited with a lot of the hands-on work of the film and its innovations) tried a lot of new things with Eternals.

As Feige has said, the whole idea with the film was to expand the MCU. “In a post-Infinity Saga world, we wanted to make a bold new step and say you don’t know everything about the universe yet and that there are these 10 spectacular heroes who you haven’t met who’ve been here the whole time,” he said at a press event for the film.

Moore had a driving vision for what Eternal could be – and director Chloé Zhao’s pitch for the film took it even further. She “took these very general ideas and obviously the Jack Kirby spectacular source material, and it felt like a very new, special step for us,” Feige continued.

Zhao brought her unique vision for what Eternals could be. Known for her lowkey films featuring natural lighting and subtle explorations of personal freedom, Zhao’s pitch involved photos of sand and a poem by William Blake – probably “Auguries of Innocence” which does speak directly to the theme of the Eternals.

“Blake was trying to convey that you can see the endless beauty and the meanings of the cosmos within the smallest things you can find on earth,” Zhao told reporters. “The vision of the film was to set up, to capture that scale – something as large as the creation of the sun and as intimate as whispers of lovers.”

Ah, whispering lovers! Now we’re talking. So let’s get back to those ship possibilities. Of course, there’s Sersi/Ikaris and Sersi/Dane. All the actors involved were well into the emotionally driven plotline of the film.

“Sersi is a superhero, but her powers are not the most obvious or flashiest,” said Chan. “She’s not the best fighter.  What she does have is empathy, and a real affinity for humankind and the earth.  She’s a free spirit.  That was one of the enjoyable things about the film, going on that journey with that character. It’s kind of her coming-of-age, even though she’s probably thousands of years old.  But she learns to trust herself and to grow into her own power.”

Madden’s Ikaris was also caught up in the emotion. Although he often plays dreamboat romantic leads, this time it’s a soldier – who struggles with throwing away duty for love. “I’m used to characters who are very focused on their love. And with Ikaris, it’s the opposite of that.  He’s kind of trying to bury that love because it gets in the way of his duty and [he’s] constantly wrestling the two.” That’s what made the character interesting for him. “You’re trying to stick to duty, but your feelings get in the way.”

Fanfic fodder for sure! But what about Harrington’s Dane Whitman, who will most likely become The Black Knight at some point in time?

“He’s a nice guy,” said Harrington, uttering a deadly put down about his very own character. But there’s more to him than just a nice guy. “I did feel [that] it’s me and Phastos’ husband and kid who are representing humanity, and I felt that from the beginning, I had to represent something that was worth saving, maybe.  And I hope that Dane comes across as a nice, standup guy.  And one thing I really respect him for is that a man flies out of the sky and shoots lasers out of his eyes and steals his girlfriend, and he’s kind of cool with it.”

Brian Tyree Henry also saw the love in his character, Phastos, a tinkerer who ends up creating the tools for humanity to destroy one another and ends up settling down with a nice boy. “What I really love the most about Phastos is that through all of that, him being eternal, him never being able to die, he still chose love,” Henry told the press. “He still decided to have a family even though he may have to watch them perish. He still tried to find a way to bring heart and love to everything he did, even though his genius was used against him.  And it just really resonated with me.”

But wait there is more! One of the big surprises of the film was the chemistry between Maccari and Druig – it was even a surprise to director Zhao who says the first time Keoghan and Ridloff met “the two of you started just riffing, you started to improvise.  And I go, what-what-wait, what’s happening? Sparks everywhere.  Initially, that was not intention.  I think really it was from you guys meeting that we saw that, and said, ‘Maybe we should let play into it.’

Ridloff confirms that there was nothing in the script that led to it. “But Chloé, under her brilliant direction, wanted us to imply that there was a lot more to Druig and Makkari.  And I feel like that what actually brought them together is that they’re both very impatient they both have a lot of power.”

Did you read that? SPARKS EVERYWHERE.

Finally, there’s yet another unexpected team-up in the film, all-time all-star strongman Gilgamesh, played by Korean action megastar Don Lee (Ma Dong-Seok); and Thena goddess of war, portrayed by Angelina Jolie. Talk about a highly combustible relationship! Throw in Gilgamesh’s baking skills (a plot device that is practically a shippers delight) and you’ve got all the ingredients.

Lee is well known in Korea for starring in more than 100 action films (including Train to Busan and hopefully more here in the US because he’s dyn-o-mite) and he’s a classic tough guy even off screen. But Jolie was more than a match for him. “We worked together a lot,” said Lee of his famed co-star. “’cause we’re looking out for each other.” Even though both were industry veterans, it was the first time they had met, and they were under pressure to film with little time for rehearsal. “We had to just shoot right away, actually but it was so comfortable.  It was like we were old friends who finally got to work together.”

Jolie is no stranger to action scenes, and her Thena bursts on the screen as one of the biggest badasses in the galaxy. But this was also part of Zhao’s magic, she says. “That’s one of the special things that Chloé is known for, bringing reality to a film, to somebody’s true self.  So, a lot of us were cast to bring out something from our own lives, something within ourselves, that maybe we weren’t even aware of.  And then let it grow within the film.”

And that Thena spirit within Jolie – it’s the real deal. “She is maybe the most fantastic I’ve ever played in a superhero.  And yet, my children said she thought it was the most like me.”

You can see why even a tough guy like Don Lee might have a hard time keeping up with that.

And we haven’t even talked about swole Kingo (Kumail Nanjiani), Interview with a Vampire’s Sprite (Lia McHugh), or mother figure Ajak (Salma Hayek). The possibilities are endless.

In the end, the Eternals is really about humanity and connecting with one another, Henry said. “I think that that is the one thing that I hope everyone takes away from this movie, is that the heart of humanity is still worth saving, and we can still bind and mend and do everything we need to through love.”

And fanficcers are known to respond to these kinds of emotions, so we shall see! Or as William Blake himself put it in the wind-up to his poem: