Cleveland Man Tried to Sue His Now-Wife After Tripping Over...

Last week an appeals court ruled that a Cleveland man couldn’t sue his fiancée for tripping over her shoes, which caused him to fall down the stairs.

According to his attorney, after falling down his now-wife Judy Khoury’s basement steps in February 2018, John Walworth shattered many bones and racked up more than $80,000 in medical bills.

Walworth claimed he didn’t notice her shoes because he was delivering a vinegar box to her basement.

Khoury’s shoes were “open and obvious,” according to a three-judge panel of the 8th District Court of Appeals, and anyone taking ordinary efforts would have been able to notice them.

On Feb 18, 2018, Walworth was at Khoury’s Cleveland West Park area home when he stumbled and fell. Khoury had requested that he transport a box containing four one-gallon jugs of vinegar from her car to her basement, so he hauled the box through a back door.

He claimed that he tripped over a pair of black and grey shoes left on the top of the basement’s steps. His right foot then hit the lip of the stair tread as he lost his balance and fell down the stairwell.

According to documents, Walworth’s leg, arm, and hand were all broken. He had three operations and went to physical therapy for several months after the fall.

In October of 2019, Walworth filed a lawsuit against Khoury. His lawyer, Henry Chamberlain, stated in court documents that Khoury failed to safeguard “social guest” from the dangerous conditions in her home.

According to Chamberlain, the fall was “tragic and violent.” He said that his client had over $80,000 in medical bills and lost more than $18,000 in income due to his inability to work for several months.

During a sworn deposition, Khoury said that she habitually left her shoes by the back door and did not think to warn Walworth. She claimed she didn’t see Walworth fall, so she couldn’t be sure that he tripped over her shoes.

During questioning, Walworth’s attorney asked her if she believed it was her fault that he tripped and she said that it was.

Khoury’s home insurance company provided two attorneys who claimed that her shoes were out in the open and did not pose a risk to any reasonable adult.

Attorneys C. Joseph McCullough and Katherine Clemons of a Cincinnati-based firm said that Khoury’s guilt did not imply that she accepted legal responsibility for his injuries.

They further pointed out that Walworth stated in his sworn evidence that Khoury’s shoes were not hidden or covered and were sitting out in the open.

“Had Mr. Walworth used ordinary care and simply looked where he was going, especially given he was about to go down a set of stairs, he would have easily seen the shoes on the floor,” Khoury’s attorneys said.

Ambrose and the 8th District ruled in favor of Khoury and her lawyers. Walworth failed to prove that events beyond his control stopped him from recognizing the pair of shoes’ “open and obvious condition,” according to Forbes, who wrote for the panel.

Walworth and Khoury married in May of 2019, more than a year after the incident, and they are still together. 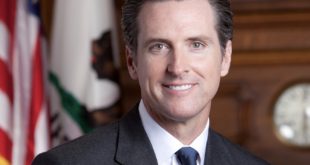 California Governor Gavin Newsom is continuing the fight against racial bias in his state, this …