MMA Fighter Who Injected Petroleum Jelly in Arms to Have... 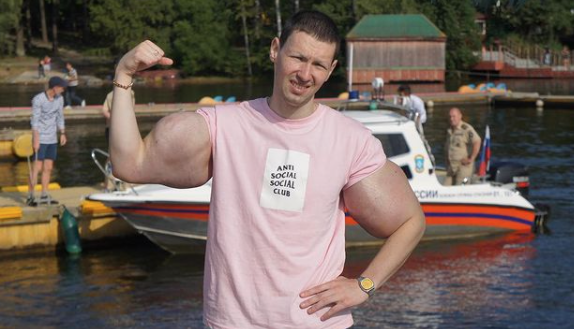 A former Russian soldier with huge fake biceps like “Popeye” could die if he does not have the petroleum jelly removed.

Kirill Tereshin, 25, has already had fake triceps removed and will now go under the knife to take out his dangerous injections. The six liters of petroleum jelly he had injected into his body has now saturated his muscles and penetrated the skin, blocking blood flow and causing fevers and pain. He got the procedure when he was 20, something he now admits was foolish.

“Soon, I will have a very complicated, hard third surgery. I don’t know how it’ll end up,” Tereshin said. “I bulked up my arms when I was 20 due to my own stupidity. I did not think about the consequences.”

The operation, which had been delayed amid the COVID-19 pandemic, will remove the petroleum jelly from his left arm.

Tereshin, who has amassed an Instagram following of 310k, shared a video of himself as he underwent a CT scan in preparation for the removal. He was told the surgery comes with significant risk.

“The risk of complications, in this case, is very high, but inaction will not help the patient,” surgeon Dr. Dmitry Melnikov warned, according to The New York Post. “A toxic substance in the body long term can complicate the kidneys and lead to death.”

The MMA fighter credits Russian WAG Alana Mamaeva, 33, with convincing him to get the life-saving surgery. Mamaeva is a campaigner for victims of botched plastic surgery.

“I am very lucky that there are doctors who took me on. God forbid something happens to this nerve, and I cannot move my arm,” he said.

“I really worry about this. I am very afraid,” Tereshin admitted. “I should have thought about this earlier, I know. I blame myself. I know I’m guilty.”